A Sweater for Pete 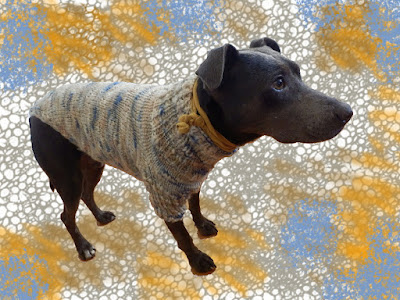 Recently, when a customer rang a bell at my door to pick up her Duchess Shawl, to my great surprise and thrill, in the hall with her was her school friend with her dog Pete :) They had met in my neighbourhood while Ivana was trying to find my building. Natasha, Pete's owner, wanted to see my works and so she ordered a sweater for her pet. 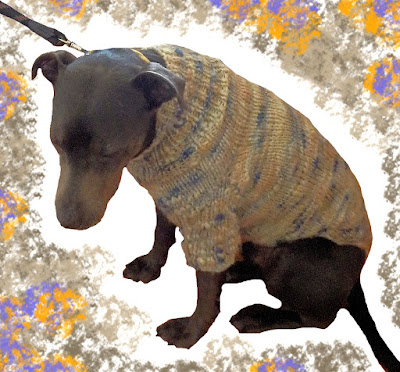 And Pete is a quiet and obedient little dog, even a bit scared, I would say. When he found himself in an unknown territory, he wasn't feeling very comfortable. He crawled up next to Natasha and wouldn't move. However, he was so cute to lick my hand and my tape as I was measuring him. He was really good and it was incredibly easy to actually do all the measuring for the sweater. I took the length from neck to tail, around his neck, chest, and tail (I made a loop for pulling his tail through it so as to keep the sweater in place, as you can see in the photos), around the leg, and length from throat to the end of his belly (there must be space left for him to be able to pee).


I knitted the turtleneck sweater from pure wool yarn called "Trend Superwash", which has 110 meters in 100 gr for needles No. 6-7. I knitted with needles size 5. The yarn is melange, shaggy and uneven, which gives the final product a bit of a rustic look.

Before the knitting process, based on the measurements, I drew a pattern and wrote down all the figures and calculated the number of stitches with the help of my gauge swatch. It is VERY IMPORTANT to knit your gauge swatch to avoid unraveling later. 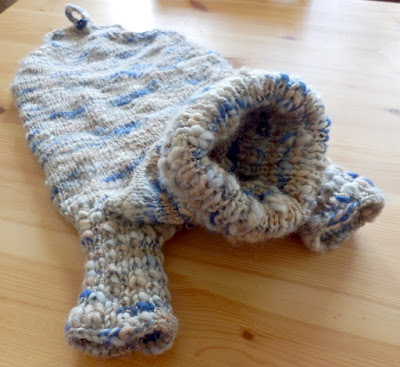 I started off by knitting the turtleneck in rib stitch 1/1 (K1, P1), on straight needles with turning. After the turtleneck, the rest of the sweater was completed in Stockinette stitch (K on right side, P on wrong side). 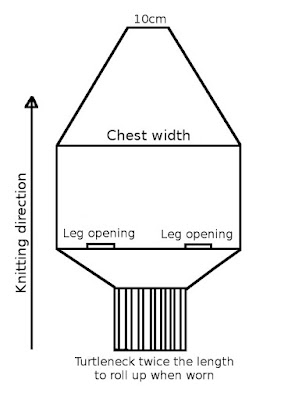 As you can see in the drawing, after the turtle-neck and the first trapeze, I left leg opening whose width equals half the measurement of the leg circumference. I continued knitting according to the diagram. I knitted the legs using 4 pointed needles size 5, and the rib stitch 1/1. The length of each leg is about half the dog's leg, so they can even be pulled up and rolled. This part of the knitting was especially challenging because, basically, I don't like working with double pointed needles and in rounds, and knitting socks is extremely difficult for me. However, as long as there is no heel to be made, I'm fine :-)

I sewed a button onto the back bottom and crocheted ch20 over which I did 1 row of sc. On top of the chain I left an opening as a button hole. This loop goes around the dog's tail to keep the sweater in place. 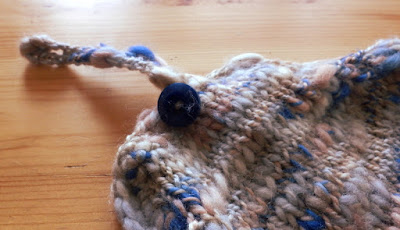 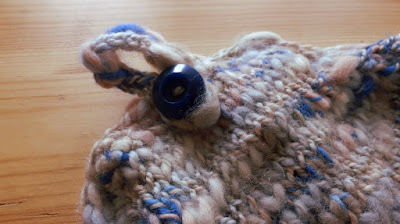 It's worth mentioning that Pete was a puppy rescued from the street. Natasha gave him a warm, loving home after she had seen him starved and frightened in her block. I can't find the right words to describe her good deed, so I can just appeal to all those people who love dogs, cats, and other god's creatures, to seriously consider adopting those less fortunate or abandoned animals before they decide to buy one. 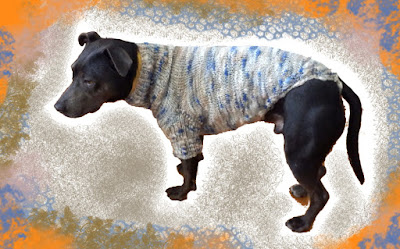