Pebbles in the Net 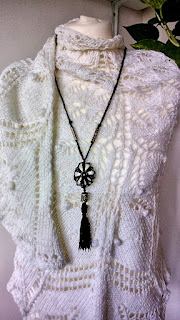 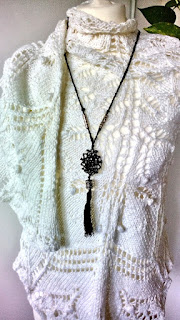 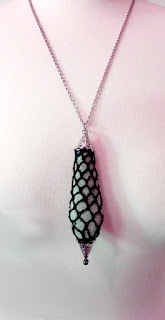 Some mementos from Greek beaches have gotten caught up in my crocheted nets.

Wanting to tidy up some parts of my flat, occupied by scattered pebbles and shells that my husband and I have collected on beaches of the Ionian and Aegean seas, an idea emerged: why don't I crochet around our memories and wear them as necklaces.
The round pebble was varnished with milky-white nail polish after being placed in the crochet rosette, so the thread I used is stiffened and glued to the stone. The light blue oval stone was in its original state, without enameling. To both necklaces I added a few silver beads from some old jewelery. The round medallion has a tassel and hangs on a chain made from black thread. The light blue pendant is attached to a long silver chain.
Labels: accessories crochet jewelery